In addition to the stars below, ‘An Anderson & Petty Christmas’ has recently added Katie Brayben, Lynne Wilmot, and Declan Egan to the line-up of this one-night-only concert on December 19.

They have had sold-out concerts at Feinstein’s/54 Below, The Duplex and The Triad in New York and in London at The Delfont Room in The Prince of Wales Theatre, The Union Theatre and at The St. James Studio back in 2014. 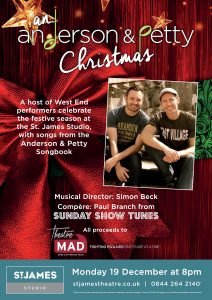