We are so happy to finally announce a new co-write, Rollercoaster that we have been working on for new UK Country Duo One Trick Pony. Having released three singles so far, You’re That Face, Old School and A New Hope they will be releasing a brand new EP: Gone Chasin’ Rollercoasters on September 3rd featuring new tracks Dream Chasers, Gone But Not Gone and our song Rollercoaster. You can pre-save the EP right here

A VIRTUAL CONCERT IN AID OF ACTING FOR OTHERS

Songwriters Anderson & Petty today announce A Christmas Wish, a virtual concert with West End stars from Everybody’s Talking About Jamie, SIX: The Musical, Wicked and more, available to stream at select times from 17 December – 20 December 2020. The concert is hosted by Ben Stock and Hilary O’Neil and is in aid of theatrical charity Acting For Others who provide emotional and financial support to theatre workers in times of need through 14 member charities.

Anderson & Petty today said, “We have been writing together for nearly ten years and in that time we have released two studio albums and an array of stand-alone singles featuring many wonderful performers from Broadway and the West End. Wish is a Christmas album and for the last few years we have hosted concerts in New York and London every season to raise money for some of our favourite charities.

This year due to COVID-19 we are not able to be together so alongside the wonderful charity Acting for Others we have created a virtual Christmas concert to be presented directly into your own homes featuring a host of stars from the stage as well as the stars of tomorrow. The concert will feature performances of songs from the our holiday album Wish, as well as Christmas musical theatre songs, Christmas Standards and comedy sketches so please join us for a night of magic and merriment and a celebration of the pure joy of performance!”

Acting for Others can be supported by donating at www.justgiving.com/ctcafo

Over the next month we will be releasing three new singles which have never been available to stream before. A few years ago we went into The Cutting Room Studios in New York City to lay down three tracks from various projects that we had been working on. The first release I Do which dropped on Friday 7th August and featuring vocals from Jen Burleigh-Bentz (Mamma Mia!) follows the life of Erika LaTour Eiffel who legally married the Eiffel Tower. We were asked to write the song as part of a “docu-musical” project called Objects of Desire which detailed the lives of people with Object Sexuality or Objectophilia which is a form of sexual or romantic attraction focused on particular inanimate objects. Check out the song on Spotify here I Do. You can also see Jen performing the song live at 54 Below in New York here I Do

On the 21st August we will be releasing Dreamworld featuring vocals from Rachel Schur (Chicago) & Mike Millan (Escape To Margaritaville) which started off as a jingle/theme song that we were asked to write for a new tea company called Realit ✓. Check out their website here

And finally on 4th September we will be releasing He Never Lost The Fight featuring vocals from Curtis Wiley (Ain’t Too Proud) which was for a project called Ghost in the House, The Life and Times of Jack Johnson, a new play written by Ernie Hudson and Frank Megna and starring Tony Todd of Candyman fame. Jack Johnson (March 31, 1878 – June 10, 1946), nicknamed the “Galveston Giant”, was an American boxer who, at the height of the Jim Crow era, became the first African-American world heavyweight boxing champion (1908–1915) You can see Curtis Wiley performing the song live at 54 Below in New York here He Never Lost The Fight

Alexa Green’s debut single Get Brave on Hollow Spirit Studios label is out now. “Get Brave” is inspired by the life-saving acts of kindness and courage that are happening on a global scale because of the Coronavirus pandemic. Hollow Spirit Studios is partnering with Partners In Health, a health organization on the frontlines of the COVID-19 response. HSS is using its platform to promote awareness around the organization and encourage donations to help stop COVID-19.

Available on all streaming platforms including Spotify – https://open.spotify.com/track/0iC7dpLaANjNPh4YvCwdqw?si=4cRoCB6yTdCnK0p6ZUuvEQ

To learn more about Partners in Health and make a donation please visit – https://www.pih.org/coronavirus-response #GetBrave #StopCOVID

Mark Petty of the transatlantic writing team of Anderson & Petty will be presenting an evening of his collaborations as part of Kieran Brown‘s “Sunday Night Socials” at The Union Theatre this Sunday 10th November at 8pm.

Tickets for Sundays’ concert at The Union Theatre are available via the following link – http://www.uniontheatre.biz/sunday-night-social.html

In celebration of the fifth anniversary of our debut album, we’ll be re-issuing You Are Home on the 2nd Nov. Featuring Cynthia Erivo, Gina Beck, Frances Ruffelle, Kieran Brown, Debbie Kurup and many more. You can pre-order it on iTunes now for just £4.99 in the UK and $6.99 in the US. It will also be on Spotify 🙂 x

Mark has been hosting a series of monthly concerts Live at Zédel this summer and on the 16th September he presented The New Musical Theatre Showcase which featured new and re-arranged songs from ourselves and also material from Kansley & Lidert, Kate Marlais & Alex Young, Oliver Boito and Webborn & Finn.

The sensational Christina Bennington who is currently starring as Raven in Bat Out Of Hell – The Musical at The Dominion Theatre in London debuted our brand new female empowerment anthem Get Brave as well as the song All She Wants which we debuted back in June with Belinda Wollaston. The always amazing Nadim Naaman (Raoul in The Phantom of the Opera and also co-writer of the brand new musical Broken Wings) performed a re-worked version of the song Tell Me which we originally debuted on our first album You Are Home. The three songs followed each other and told the story of a woman at a crossroads in her life and the choices that she has to make. Check out the videos here:

Christina Bennington – All She Wants

We debuted our brand new song All She Wants at Live at Zédel last month as part of Crazy Coqs Presents: Pride at the Musicals. Check out the video here with the fabulous Belinda Wollaston

We are so pleased to finally be able to present to you our brand new album Wish which features eight of our original holiday songs and one special bonus mix.

And from the UK – Jaime Adler (The Sound of Music, Les Misérables, Matilda, The Nether – Olivier-nomination), Ilan Galkoff (The Secret Diary of Adrian Mole, The Braille Legacy, Bumblescratch, Elf) Harriet Turnbull (Young Marx, What We Did On Our Holiday – Movie) and Natasha J Barnes (American Idiot, Funny Girl, Cinderella, Mack & Mabel: In Concert)

Net proceeds from the sale of the album will benefit Housing Works in NYC. 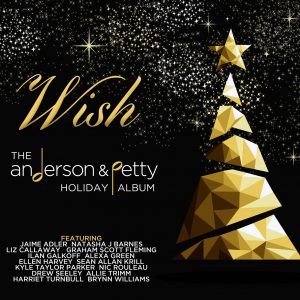 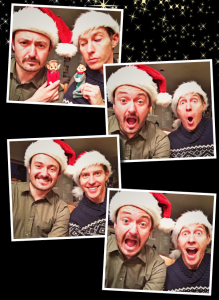 Come join us at 1pm today at The Actor’s Church in Covent Garden to reflect, remember & celebrate with the Choir of St Paul’s Church World Aids Day Requiem on behalf of The Make A Difference Trust. The wonderful Savannah Stevenson will be performing our song We Stand Together 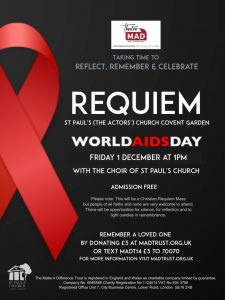