I am thrilled to announce that our first single  Superman (Feat. Autumn Hurlbert) can now be downloaded on amazon.
This release features the vocals of Autumn Hurlbert, backing from Jillian Zygo and Kelly E. Waters, and the amazing band of Dennis Michael Keefe, Danny Taylor and Mike Rosengarten.
Click below for your country:
UK
USA
Japan
Germany
You will also be able to download worldwide on iTunes very soon :)
http://andersonandpetty.com/wp-content/uploads/2011/11/AP_logo-300x109.png 0 0 Mark http://andersonandpetty.com/wp-content/uploads/2011/11/AP_logo-300x109.png Mark2012-06-06 09:46:172012-06-06 18:20:36Superman (feat. Autumn Hurlbert) now available on amazon!!!!!

Our first single will be available for download on iTunes, Amazon and Spotify worldwide very soon….. :)

Once again we would like to extend a huge thank you to everyone who performed, played and helped to organise our concert. Thank you…xxxx 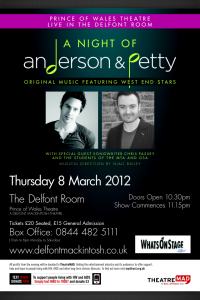 Not long to go now until An Evening With Chris Passey and Friends on Sunday 22nd January at the Leicester Square Theatre.  Shona White will be performing Superman and Nadine Cox will be performing Love Will Find Its Way. We will be backed by the wonderfully talented students of the Musical Theatre Academy.

Tickets are now SOLD OUT so hope to see you there!!!!

Big World Theatre Company has teamed up with Carrie James Productions to present An Evening with Chris Passey and Friends, an exciting production at the Leicester Square Theatre Lounge featuring Chris Passey, Anderson and Petty, students of The Musical Theatre Academy and many many more exciting performers.

We would just like to say a big thank you to everyone who performed for us in New York and London last year. Where would we be without you x

The multi-talented Lucy Williamson will be in concert at The Landor Theatre on Wednesday 18th January with special guests Alexander Evans, Andy Brady and Claire Moore. She will also be performing our very own composition Love Will Find Its Way.  Tickets are for this special one-off concert are priced at £16.00 (£14.00 Concessions) and can be obtained from The Landor Theatre Box Office on 020 7737 7276 or online here.